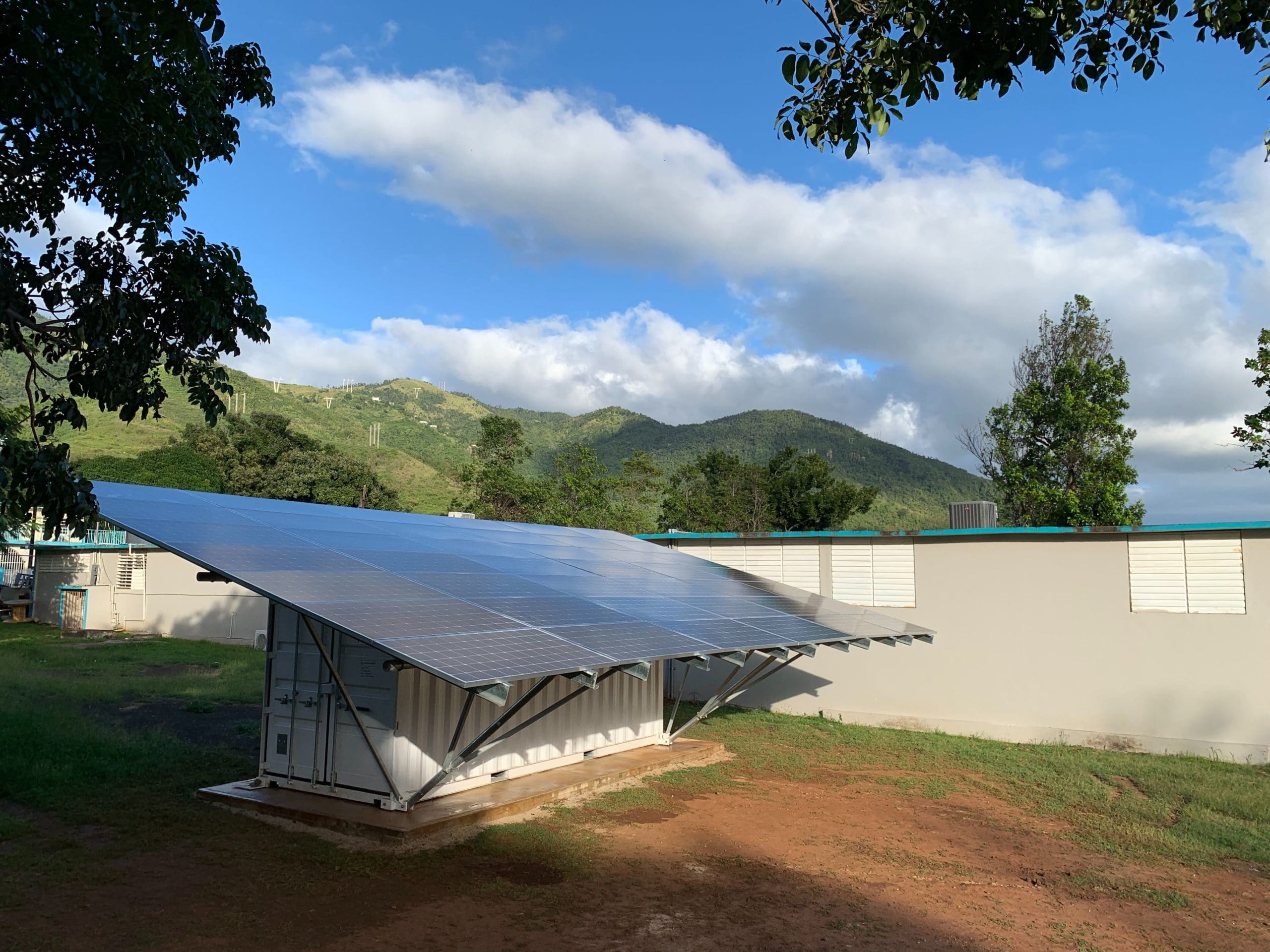 Mercy Corps and BoxPower seek to disseminate lessons learned from our Resilience Hub Program in Guayama, Puerto Rico to create a replicable model for energy resilience projects on which other non-profits can build.

In 2017, Hurricane Maria hit Puerto Rico, causing unprecedented loss of lives and livelihoods whilst also exposing the fragility of the Puerto Rican electrical infrastructure. During this crisis, more than eighty¹ percent of the grid’s transmission and distribution power lines collapsed , leaving 1.5 million customers ² without power. This loss of infrastructure meant that communities had to find power generators to keep medicines cold, ventilators working, and other essential electrical equipment functioning. It has been  documented³ that this prolonged lack of power for essential needs led to a further loss of lives. This highlights the essential need for reliable electricity supply before, during and after such a crisis. 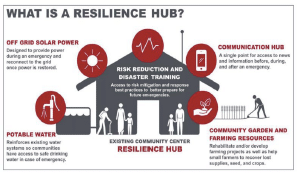 Following the hurricane, Mercy Corps initially provided direct
emergency response. However, it soon became evident that a
successful transition to long term recovery required a community
resilience approach. Mercy Corps secured funding for our Resilience Hubs Program, which aimed to create 15 Resilience Hubs in the most vulnerable communities around the island to equip them with resources that would allow them to respond to future natural disasters.

These 15 Hubs serve to leverage existing community centers and provide a range of resiliency support mechanisms. To date, 17 such centres have been established, providing a multitude of Mercy Corps sponsored assets for community use. These include community gardens and agricultural resources; disaster risk reduction training and material; connectivity equipment; potable water storage systems; and off-grid photovoltaic energy with storage capacities – all of which directly benefit over 95,000 members of Puerto Rico’s most vulnerable communities.

Since implementation, the capabilities and resiliency of the Hubs have been both tested and validated. In 2019, storm Dorian and Karen swept the island, followed shortly after by a 6.4 magnitude earthquake in January 2020. The damage caused by the earthquake was largely considered one of the worst crises the island had faced since Hurricane Maria. The Resilience Hubs played a crucial role in providing a centralized locale for storm preparation, coordination and community organization during all three disaster events. Emergency response was centralized at the Hubs as critical access to ​water, energy, recharge stations, food and emergency supplies and internet connectivity were provided. One Hub, equipped with a kitchen powered by solar energy, was used by World Central Kitchen to provide meals to surrounding communities and first responders, impacting at least 1,500 individuals during its first week of emergency response.

The Use of Solar for Resilience Hubs

The use of solar + battery storage for Mercy Corps Resilience Hubs proved essential for providing reliable energy access throughout these crises. Solar connected to battery storage allows for the use of energy generated from the system day or night, both in times of grid supplied electricity and during an outage. Without the storage, a grid-tied solar energy system would not provide energy during an outage. The promotion of renewable energy also aligns tightly with Mercy Corps community driven approach to problem solving, and the desire to mitigate the impact of climate change within the communities it serves. Solar power generation was an obvious choice given the inherent vulnerabilities of Puerto Rico’s grid and the country’s UV potential.

Solar + storage enables communities to effectively plan due to the knowledge that they will have reliable electricity access. The flexibility of solar + storage, particularly through a modular approach, means that the capacity of the existing system can be increased to meet emergency requirements: for cold storage, medicine preservation, or whatever disaster response may arise. Lastly, solar + storage removes reliance on diesel for generators, which dramatically increases in cost or is completely unavailable during disasters.

For these reasons, access to clean and reliable energy to power the Resilience Hubs remained a requirement throughout the design phase. The Mercy Corps Puerto Rico (PR) Infrastructure team assessed the needs of each community and site location to see if solar installation was an option. This process identified that 14 of the 17 Hub locations could have high-capacity solar energy systems installed to better support the resilience of the communities they serve. One such example is the Guayama Hub.

The Guayama Hub was established in 2019 at the community school, Rafael A. Delgado Mateo. Through a competitive procurement process, BoxPower was identified as the solar installer, providing a dependable solar + storage system to support the local community in the face of emergencies.

Groundwork and foundation work began in late December in partnership with local contractors. On January 3, 2020, the container had been placed on the foundation and connected to the school. Soon after this, Puerto Rico schools, including Rafael A Delgado Mateo, were closed for weeks following a 6.4 magnitude earthquake. Despite these challenges, BoxPower was able to get access to the site in order to rapidly install the solar array, and fully commission the BoxPower unit by January 13, within a week of the earthquake.

Highlights of the Project

Mercy Corps PR team were happy with the number of communication channels between themselves, BoxPower and the subcontractor, and the speed at which the anchoring of the container, PV installations and commissioning moved once the foundation and permits were cleared. The team felt that even when working across different time zones and accounting for staff leave, BoxPower were always quick to respond, which meant that if issues arose they were mitigated quickly relative to the complexity of the tasks.

Furthermore, the team were impressed with the expertise shared by BoxPower, “Eric Youngren did one of the best handover presentations to the Community Based Organisation (CBO) and the community that we’ve ever had, it was clear, knowledgeable and full of examples. It was given in English but it did not seem to be a barrier since we had someone from our team translating it.” BoxPower was able to train local contractors and school employees on both the installation of the racking and also the operation of the system. This also helped to increase local engagement, reduce costs, and allow for local operation of the system. Given the remote monitoring capabilities installed, BoxPower can identify problems remotely should they arise and walk the local operator or a local technician through the issues. 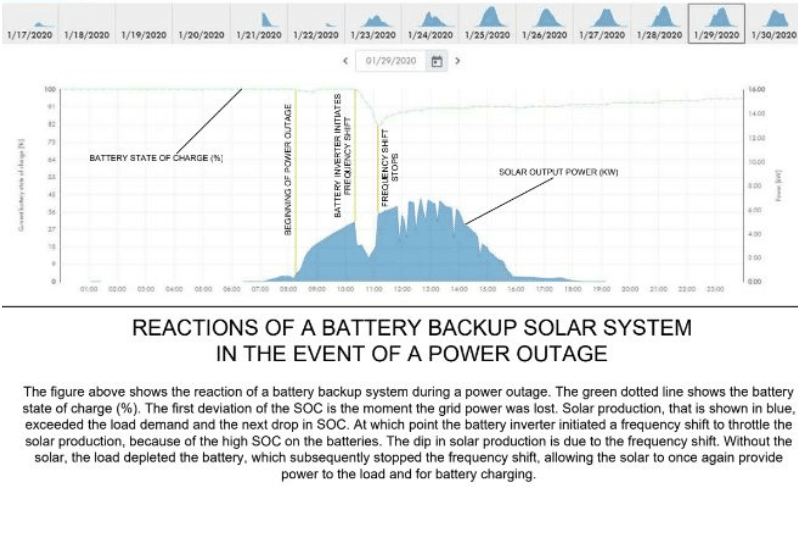 The system was quickly put to the test on January 29, 2020 when the power went out just after 8:00am. As can be seen on the graph below, the batteries seamlessly picked up the load. According to school representatives, the only reason they knew the power was out was when local residents started to come to the Hub to use the power!

Reliable power like this is essential for the local community. As described by the School Director, “​for us it has been critically important to have a good solar energy system that can serve the community. Especially for those of us that may one day need this space as a refuge [during a natural disaster]. With this system, we’ll be able to continue educating the children. This solar system has been a blessing.​”

Centered around helping communities, governments, humanitarian and emergency relief agencies, BoxPower is a social enterprise providing access to power with containerized solar + storage solutions. BoxPower’s products are designed to bring off-grid power rapidly and provide energy resilience when power supply from the grid is unavailable or unreliable. Benefitting over 3,000 people to date, they have helped provide clean, affordable, reliable energy access to established and emerging markets around the world. Their products are rapidly deployable, ship within days of ordering, and install on-site in a single day. By pre-assembling and mass-producing their systems in shipping containers, they can control cost, lead time and logistics.

BoxPower has been working in the Caribbean since Hurricane Maria, providing resilience with its rugged systems. Its systems, including that at the Guayama Resilience Hub, can withstand 188 mph winds. This is crucial for providing reliable electricity supply for critical loads during natural disasters. Furthermore, the standalone design allows the system to be installed next to the Hub, which enables solar provision without requiring ownership of the building. This ​video chronicles BoxPower’s work in Guayama and the Caribbean.

Mercy Corps in partnership with BoxPower provided a model for energy resilience in the community of Guayama, Puerto Rico. This system has continued to provide essential backup power for the community in the face of emergencies. The outcomes of this project have been commended by both the local community and Mercy Corps and we believe that there is great potential for this model to provide a high quality solution for backup power across numerous Resilience Hubs. As the Puerto Rican community and communities around the world prepare for the next disaster, Mercy Corps and BoxPower are confident that its Hubs will continue to support local disaster response efforts and provide a standardized and scalable model for comparable efforts globally.

BoxPower is a leading provider of plug and play solar energy solutions worldwide, offering best-in-class engineering, components, and workmanship to meet the needs of residential, community, commercial, and agricultural applications. BoxPower’s modular systems can be sized from as little as 3.5kW and as much as 528kW. From rural homes and farms in California to community microgrid projects in Alaska and disaster recovery in Puerto Rico, BoxPower offers clean, reliable, and affordable energy anywhere.

Mercy Corps is a leading global organization powered by the belief that a better world is possible. In disaster, in hardship, in more than 40 countries around the world, we partner to put bold solutions into action — helping people triumph over adversity and build stronger communities from within.

Now, and for the future.