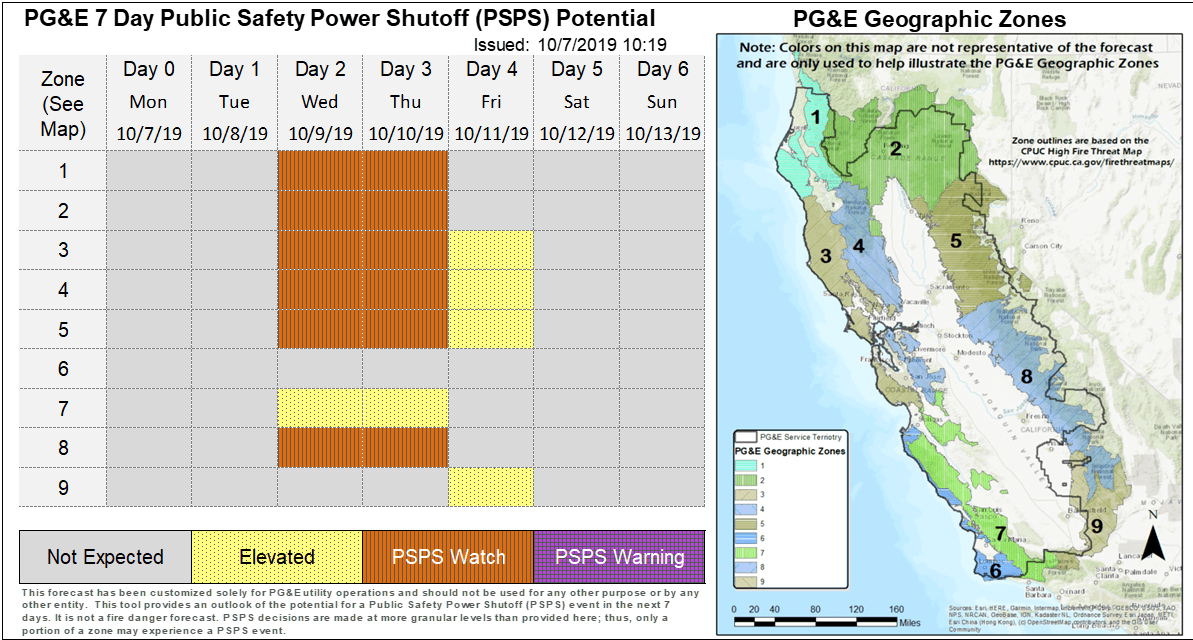 It’s fire season, once again. Reeling from the loss of life and estimated $16.5 billion in damage from the Camp Fire, a direct result of an aging and ill-maintained utility infrastructure, this year PG&E began the season by shutting off the power to some 21,000 residents in three counties, and the very next day again to over 48,000 in the foothills areas. It was a preventative measure in response to the forecast red flag warning. While the school kids were complaining about loss of TV and Xbox for the second day of the forewarned 24 to 48 hour shutdown, most the grown-ups I know in my rural county were relieved. According to CalFire, roughly 10% of fires between 2013 and 2017 were caused by utility infrastructure, including some of the State’s largest and most deadly. My own neighborhood was evacuated in the 2017 Lobo fire, which had been caused by a downed power line. We were spared; but seeing the night sky light up with flames a mile from our home is not something I will ever forget. So I was glad to be in one of the areas PG&E had designated for the county’s first 2019 fire season power shut downs—that is, until I realized how vulnerable we were without power during a red flag warning, and why safe and reliable emergency back-up systems are essential.

I had enrolled in the PG&E alerts system, and received text messages warning of the shut-off well in advance. I gassed up my truck, froze blocks of ice to keep in the fridge so the food wouldn’t spoil, charged my cell phone, and gathered the usual assortment of candles and solar lanterns. With the weather still temperate and no need of heating or cooling the house, it seemed at first like it was no big deal. In fact, it was kind of fun. We ran around playing flashlight tag with my granddaughter, and enjoyed sitting out under the stars, more visible than usual for all the darkness of a blackout. But around 10:00pm when the wind picked up, the safety implications of rural life without electricity hit me. We have a well for our water, and despite a whole-house fire sprinkler system, a 2500 gallon water storage tank, and a couple of water lines connected to fire hose hook-ups, the well and water tank pumps don’t work when the power is out! So there was no way for the fire suppression equipment to be used. Duh. But it was not something I had considered when building my rural home years ago, long before the “new normal” of Public Safety Power Shutoffs.

As I sat in the dark and listened to the hum of neighbors’ generators kicking on, I grew more anxious. Portable emergency generators typically require the use of extension cords to plug in various appliances. Great. So now we have no water, and a bunch of gas and diesel engines sitting out in the parched woods with extension cords running all over the dry grass. And when I went to check for weather and power updates on my cell phone, having made sure to charge it fully before the 5:00 shut-off, I found my cell service was also down. I suddenly realized I not only had no cellular, but no wifi, with the modem requiring, of course, electricity. If a fire broke out at my place, I had no way to contact help. To make matters worse, despite all the enrolling in emergency alert systems months before, no one could call us to alert us of a need to evacuate. So I sat in the lantern light redesigning my home compound energy system to include back-up power, sufficient to at least assure supply of water and two-way connectivity to the outside world.

I have been designing affordable, sustainable homes for folks in my area for a few years now, including ways to optimize the rural on-site systems most of us rely on: wells, wastewater (septic systems), and power generation. Despite tons of research, finding a safe and reliable solution for emergency back-up power is tricky. While portable gas and diesel generators are the norm, they pose many limitations and many risks. You can’t power a whole house off the types of generators you get at the local hardware store. What’s more, most folks don’t have essential systems like well pumps and septic systems wired with a plug-in option anyway. And, when the generator’s diesel or gas runs out, you are left once again with no power—yes, that’s right, the gas station pumps don’t work without electricity either. So the portable generator option doesn’t really solve the problem: at best, you end up running extension cords to charge your phone and laptop, and maybe the fridge or necessary medical equipment. Furthermore, extension cords pose a risk in themselves, with nearly 5000 house fires caused by them every year–firing up a portable generator during a red flag warning doesn’t make a whole lot of safety sense. So I have spent a lot of time researching safer and more reliable alternatives.

I looked at whole-house generator options that are hardwired and presumably safer than the small portable ones. But those are super expensive, ranging from a few thousand to over $10,000 for the generator, plus the cost of propane installation and fuel (propane being the only option for rural folk without access to utility natural gas). I then researched solar options, figuring if I am going to spend the money, I might as well go with a renewable energy solution— lower my electric bills with solar while at the same time having emergency back-up power when I need it.  Typical grid-tied solar systems don’t solve the problem, either: when the grid goes down, you still lose the power those panels are generating–unless you have a way to store the energy in batteries. Off-grid systems that have battery storage for back-up are notoriously expensive, given the high cost of batteries. Few solar companies offer back-up systems for grid-tied consumers like me. But, as it happened, a few weeks before the power shut-off I had discovered a local solar company, BoxPower , who has engineered hybrid solar plus back-up systems that are affordable, safe, and reliable.

Based in Grass Valley, BoxPower offers a turnkey solar plus emergency back-up system, pre-wired, permit-ready, that can be installed in a few hours – not the months a typical solar project requires. The systems can be grid-tied, or off-grid. The “hybrid” design incorporates batteries as storage to assure power at nighttime and even when the grid goes down, with options for a pre-wired (safe) generator for extra back-up energy when needed—minimum of 3 days of power guaranteed, rain or shine . BoxPower has systems as small as 3.5kW and up to 528kW, with options for adding on over time and for connecting to rooftop mounted panels as well. As the average home needs about 6kW to 9kW for 100% renewable energy, with a BoxPower hybrid system you can have ample emergency back-up power for the whole house in addition to well and septic systems, AND lower the cost of those high utility bills at the same time. And, the BoxPower systems are actually affordable – only slightly more than the bids I got for a grid-tied rooftop solar system on my house that did not even include batteries for storage and generator back-up.

The BoxPower innovation is the use of a steel “box”, either a 4’ x 8’ pallet “MiniBox” or 20’ shipping container, on which the solar panels are mounted using a pre-engineered racking system. The solar inverter plus batteries and a back-up generator are pre-wired inside the box, which is not only fire-safe but eliminates the cost of building a weather-proof shed for storing solar or generator equipment. The MiniBox supports 3.5kW of solar panels, with inverter capacity up to 18kW for connecting to additional rooftop or ground-mount panels. Larger 6kW to 22 kW systems are mounted on a 20’ shipping container, so you also get the bonus of usable storage for things like lawn and garden equipment, with a nicely finished interior pre-wired with outlets that far surpasses the quality and longevity of a shed, and without the cost of building one. The whole system can be towed or trucked anywhere, plopped onto the ground and mounted without the need of an expensive foundation, and easily connected, whether to the grid or off-grid. Ingenious. I fell in love with the system because of the ease of it. With the 3.5kW MiniBox, for under $20k I can get a plug-and-play solution that will give me ample emergency back-up power for my well and water pumps, as well as all the other critical loads in the house – wifi and outlets for charging cell phones and laptops, lights, even hot water and the fridge. The rest of the year, the system will provide much of my total energy. Because all BoxPower systems are modular, I can add a few more panels on my roof, easily connected to the MiniBox inverter, and be “net zero” – as well as free of the high costs of electric charged by my utility!

As for living under the new normal of Public Safety Power Shutoffs, as my 4 year-old granddaughter told me: “Don’t worry, the sun still works!”

N.B. Shortly after discovering BoxPower, I went to work for them. I wasn’t looking for a job. A friend told me about them, given my passion for making sustainable living affordable for all people (even us moderate income folks), and my own quest for finding least-cost solar solutions. So, I checked them out. A week later, I accepted a job offer, because I believe that the BoxPower systems have cracked the nut in making solar both easy and affordable, better than most!