PRESS RELEASE FROM: The Navajo Nation Office of the President and Vice President

Kayenta Chapter partnered with the University of Utah, New Sun Road, BoxPower, and Diné Energy to establish an autonomous solar-based microgrid to electrify the 24 homes located in the Comb Ridge/El Capitan communities in Kayenta, and offer internet connectivity. The project is part of Kayenta Chapter’s five-year goal to provide water, electricity, and septic tanks to 100-percent of Kayenta residents. The total cost of the project is estimated to be $2.8 million and will also be supported with additional funding from the Navajo Nation.

To view the full listing of awards, please see the U.S. Department of Energy’s announcement: https://www.energy.gov/articles/doe-awards-9-million-tribal-communities-enhance-energy-security-and-resilience 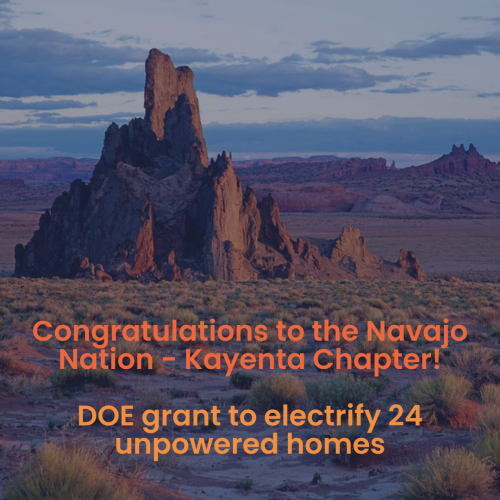 “Congratulations to all of the tribal nations who were awarded clean energy funding through the U.S. Department of Energy. Kayenta has led the way for renewable energy development with the Kayenta Solar I and II generation facility, which generates over 55 megawatts of solar power. This will improve the quality of life for the 24 multi-generational homes that will receive electricity through this funding award. Congratulations to the Kayenta Chapter, you all are an inspiration to our Navajo people. Thank you to Kayenta Chapter President Dalton Singer, Secretary Granholm, Congressman O’Halleran, and the Biden-Harris Administration,” said President Nez.

In August 2021, President Nez and Division Directors welcomed Secretary Granholm and congressional members to the Navajo Nation to advocate for renewable energy funding and projects that benefit the Navajo people. President Nez also highlighted the Hayoołkaał or Sunrise proclamation issued by the Nez-Lizer Administration in 2019, which created a new economic vision for the Navajo people through healing the land, fostering clean energy development, and providing leadership for the energy market for the Navajo people. Since then, the Navajo Nation has taken steps to transition from fossil fuel development to renewable energy.

“The Navajo Nation is striving to be a renewable energy leader nationwide. We want to be able to electrify more homes and communities on the Navajo Nation, and expand those efforts into other communities and industries in the southwest,” added President Nez. During Monday’s virtual announcement, Secretary Granholm spoke about the Biden-Harris Administration’s vision for clean energy development, adding that the 14 projects funded for the 13 tribal nations will harness solar, hydro and geothermal energy resources, and create jobs and provide essential services such as electricity and heating for families who never had such amenities before.

Delegate Brown praised the work of Kayenta Chapter and its partners who developed the grant proposal over the course of several years. He also described the field work and data gathering conducted by former and current Kayenta leaders. “Because of them this is possible,” he added.  The Nez-Lizer Administration acknowledges and thanks the Kayenta Chapter and all of the partners who helped to secure the grant funding.

For the latest news from the Office of the President and Vice President,  please visit https://www.opvp.navajo-nsn.gov/