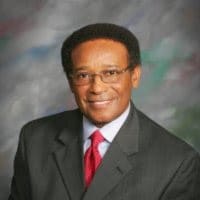 Robert L. Harris is a retired Vice President of Pacific Gas and Electric Company (PG&E). A native of Arkadelphia, Arkansas, where he attended segregated schools, he migrated to Oakland, CA in 1960 and graduated from Oakland Technical High School in 1961. A 1963 graduate of Merritt College and a 1965 graduate of San Francisco State University, he was inducted into S.F. State University’s Hall of Fame in 2007. In 1972, he received his Juris Doctor degree from the University Of California School Of Law at Berkeley (Boalt Hall).

In 1985, he became the first and only lawyer in PG&E’s history to argue and win a case for it in the United States Supreme Court. In so doing, he became the first lawyer in the nation to convince the Supreme Court that a corporation, like an individual, has negative First Amendment rights. After completing the Advanced Management Program (AMP 103 ) of the Harvard Business School (1988), he became Division Manager of one of PG&E’s major operating Divisions where he had responsibility for over 500 employees and led the efforts to restore energy in the aftermath of the 1991 Oakland firestorm (one of the largest in the nation’s history) in record time. Subsequently, he was selected as Executive Assistant to the PG&E President and thereafter in 1994 elected Vice President of Community & Local Governmental Relations. And, in 1998, he was elected Vice President of Environmental Affairs (the first ever environmental officer for PG&E), and he retired on January 1, 2007 as Vice President of Environmental, Health, Safety, Technical and Land Services after 34 years of service with the Company.

As a community leader, he has distinguished himself in numerous endeavors and is the recipient of countless awards from across the nation. A former president of the Charles Houston Bar Association of the San Francisco Bay Area and a member of its Hall of Fame, he served in 1979-1980 as President of the National Bar Association (NBA), the first ever from the West Coast. As President of the NBA, he convened the first National Conference on Black on Black Crime in 1980. One of the founders of the California Association of Black Lawyers (CABL) in 1977, he presided at its first meeting; has received its highest honor (the Loren Miller Award) and its Life Time Achievement Award. Moreover, he drafted California Code of Civil Procedure 527.7 on behalf of CABL which was sponsored by then State Senator Diane Watson. In 2013 he was inducted into the NBA Hall of Fame and in 2016 into the CABL Hall of Fame.

As a civil rights activist, he has received the NAACP’s highest legal honor, the “William Robert Ming Award” (1986) for litigating civil rights issues. His leadership in the legal profession earned him the NBA’s highest honor, the “C. Francis Stradford Award” (1982) and the American Bar Association’s highest Pro Bono Service Award (1986). Because of his commitment to civic affairs, Kappa Alpha Psi Fraternity, in 2005, bestowed upon him its highest honor, the “Laurel Wreath.” On two separate occasions, he served as Co-Chair of the San Francisco Lawyers Committee for Civil Rights, and was its first Black Co-Chair.

He is a member of the Executive Leadership Council, and a member (Lead Director) of the board of directors of Amarantus BioScience, San Francisco, CA. He is also a former member of the Advisory Board of Tri-Valley Bank (San Ramon, CA) and a former member of the board of directors of Alta Alliance Bank (now, BridgeBank), Oakland, California. A Board member emeritus of both the Kappa Alpha Psi Foundation and the Peralta Colleges Foundation Board of Directors, he is the current Secretary and General Counsel of the Oakland African American Chamber of Commerce, and was the 2013 Commence Speaker for Merritt College, Oakland, CA. He is the host of “All About Community” on Comcast cable OURTV78. He was selected for the History Makers in 2006 and currently serves on the Board of Trustees of the Boule Foundation.

Active in countless organizations, he is past chair of the United Negro College Fund’s Bay Area Advisory Board and has received its highest honor, the “Frederick D. Patterson Award.” From 1996-2000, he was a commissioner for the Port of Oakland and previously served as a Planning Commissioner for the City of Richmond. Active in energy matters, he is a former General Counsel of the American Association of Blacks in Energy, a former board member of the U. S. EPA’s National Environmental Justice Advisory Council, the Congressional Black Caucus’ National Energy Policy Commission, the California EPA Advisory Committee on Environmental Justice, and is a former member of the Board of Directors of the California League of Conservation Voters. A former member of the Board of Trustees of the Alta Bates Medical Center (Berkeley, CA), he is Past Chairman of the Board of Trustees of the African American Experience Fund of the National Park Foundation (emeritus Board Member) and is the current Chair of U. S. Congresswoman Barbara Lee’s Finance Committee. From 2014 to 2015, he served as a member of Oakland’s Domain Awareness Center Ad Hoc Advisory Committee on Privacy and Data Retention. On six (6) different occasions (1980, 1992, 1993, 1994, 1995, and 2009) he was selected by Ebony Magazine as one of the “100 Most Influential Blacks in America.” Harris is the author of the recently published book, “Goodbye, Arkadelphia! Turning Obstacles into Opportunities.”

He is married to Glenda Newell-Harris, M.D., and is the father of four children and the grandfather of six.